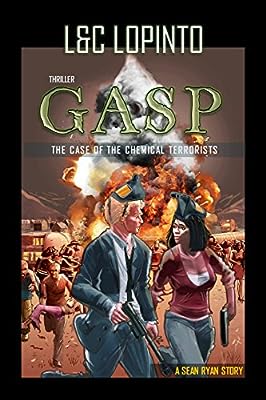 Price:
As of 2021-04-18 22:20:52 MDT (more info)
Product prices and availability are accurate as of 2021-04-18 22:20:52 MDT and are subject to change. Any price and availability information displayed on http://www.amazon.com/ at the time of purchase will apply to the purchase of this product.
Availability: Not Available - stock arriving soon
Buy Now from Amazon
Product Information (more info)
CERTAIN CONTENT THAT APPEARS ON THIS SITE COMES FROM AMAZON SERVICES LLC. THIS CONTENT IS PROVIDED 'AS IS' AND IS SUBJECT TO CHANGE OR REMOVAL AT ANY TIME.

Juliana Del Rio wants to save the environment, but she didn't realize the cost and the bad guys out to rape the world and possibly her! She and Sean are fighting the worst kind of criminals in this sequel to NUKES B00DZXUC20

Details>/H2>
When a train of toxic chemicals is derailed near an area populated by African-Americans, causing a poisonous explosion that kills hundreds of residents, Juliana Del Rio of the EPA and Sean Ryan of the FBI must team up to unearth the culprits.
Infiltrating hate groups and an environmental conference in Argentina, they seek to discover who is causing suspicious chemical accidents worldwide, before the death toll mounts further.
Having survived the previous adventure in Alaska and nearly loosing their lives and jobs, Juliana Del Rio, an EPA/FBI agent and Sean Ryan an ex-narc now working for the FBI’s Environmental Crimes Unit, are happy to work together again. Sean is slowly coming around to Juliana’s point of view and has embraced his new environmental assignment and kicked his alcohol addiction. He is a new man. Julie is finally getting the hang of being an FBI agent and took a new exam. They now enjoy each other’s company and are determined to crack this case. Will their new adventure lead to romance?
Reviews:

The Midwest Book Review calls this book a “gripping, shocking and exciting novel that keeps the reader relentlessly turning pages until the end!”

“In writing Worst Case Scenario, the LoPintos drew on their combined experience as chemical engineers, knowing the weaknesses of petrochemical processing and transportation of chemicals. They studied at least six incidents, all believed to be “accidents” but no one knows how they happened.... “ Anne Thompson, Rocky Ford Daily Gazette.

“I enjoyed both of your books and think that you two have created what could be a marvelous franchise for a film and television property. Sean and Julie are strong characters.  With Sean, you have an archetype that fits nicely into the hero’s journey. He’s a reluctant hero and Julie’s younger character, a feisty Latina, spurs him into action.  There’s nice chemistry between these characters... They would be two meaty films. I thought immediately of Harrison Ford and Jennifer Lopez.” Scott Petri, screenwriter./